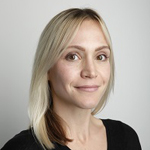 Dr Anna Kolliakou has a BA (Hons) in Psychology from the University of Essex and an MSc in Clinical and Public Health Aspects of Addiction from the Institute of Psychiatry, Psychology and Neuroscience - IoPPN, King’s College London. After having served as a researcher on health services, genetic and addiction projects at the IoPPN, she joined the Psychosis Studies Department in 2008 where she completed a PhD on patterns of cannabis use in first-episode psychosis.

In 2014, she joined the NIHR Maudsley Biomedical Research Centre (BRC) as a post-doctoral researcher on PHEME, a 3-year EU-funded project, which aimed to model, identify and verify rumours as they spread across media, languages and social networks. Anna’s role specifically focused on developing the mental healthcare branch of the project, where PHEME’s new veracity intelligence methods were tested and validated, through a series of case studies on legal highs, medication, self-harm/ suicide and stigma and exploration through combined social media and CRIS analysis.

In her current role as Clinical Informatics Interface and Network Lead, Anna manages the extension and development of internal and external collaborations for the CRIS team and wider BRC informatics initiatives.