Inflammation in the brain is linked to a greater risk of schizophrenia, according to a new study part-funded by the NIHR Maudsley Biomedical Research Centre (BRC).

The ground-breaking research is the first to show that immune cells – which can cause inflammation of our bodies tissues when they react to fight infections – are more active in the brains of people diagnosed with schizophrenia, as well as those who are at risk of the disease.

“Schizophrenia is a potentially devastating disorder and we desperately need new treatments to help sufferers, and ultimately to prevent it,” said Dr Oliver Howes, head of the psychiatric imaging group at the UK Medical Research Council (MRC) Clinical Sciences Centre.

“This is a promising study as it suggests that inflammation may lead to schizophrenia and other psychotic disorders. We now aim to test whether anti-inflammatory treatments can target these. This could lead to new treatments or even prevention of the disorders altogether.”

For the study, researchers from the MRC’s Clinical Sciences Centre and King’s College London used positron emission tomography (PET) scans to measure levels of activity of immune cells in the brain.

These cells, called microglia, respond to damage and infection in the brain, and are also responsible for rearranging the connections between brain cells so that they work as well as possible.

The researchers tested 56 participants, some of whom had already been diagnosed with schizophrenia, some of whom were at risk of the disease, and the rest of whom had no symptoms or known risk factors for the disorder.

The research showed that the activity levels of microglia in the brain increased according to the severity of symptoms in people with schizophrenia, and that people with diagnosed schizophrenia had high levels of activity of these immune cells in their brain.The findings raise the possibility that people who are most at risk of schizophrenia could be screened for brain inflammation before they become ill, allowing them to be treated early enough to avoid the most severe symptoms of the disorder.

“Our findings are particularly exciting because it was previously unknown whether these cells become active before or after onset of the disease,” said Peter Bloomfield, doctoral student and lead author of the study at the MRC Clinical Sciences Centre. “Now we have shown this early involvement, mechanisms of the disease and new medications can hopefully be uncovered.”

As well as receiving funding from the South Maudsley BRC, Dr Howes was funded by the MRC, a Maudsley Charity grant, the Maudsley NHS Foundation Trust and King’s College London.  The study is published in the American Journal of Psychiatry. 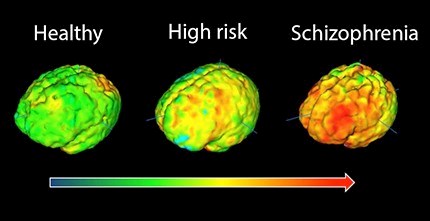