Could intranasal oxytocin be used to treat people at clinically high risk of psychosis? 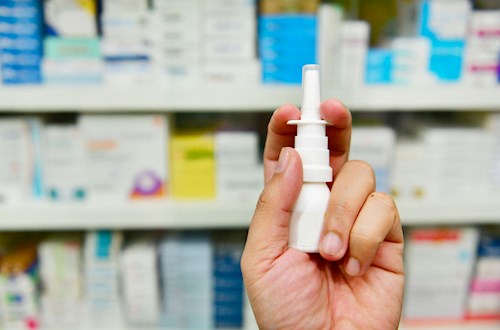 Oxytocin, a hormone most often associated with childbirth, is also known for its effects on social-emotional cognition and behaviour. According to new research supported by the NIHR Maudsley BRC, oxytocin also alters blood flow in the hippocampus — a brain region strongly implicated in the onset of psychosis — in those at clinically high risk of psychosis.

There are currently no licensed pharmacological treatments for people at clinically high risk of psychosis. People in this clinical category feature attenuated psychotic symptoms, reduced social, emotional and occupational functioning, and a 20–35% risk of developing psychosis within two years. Since the majority of these individuals do not go on to develop psychosis, any new treatments need be safe, well tolerated and have minimal side effects.

The study, conducted by the Early Psychosis: Intervention & Clinical-detection (EPIC) Lab, led by Dr Paolo Fusar-Poli—a member of the NIHR Faculty—was the first to investigate the neurophysiological effects of oxytocin in people at clinically high risk of psychosis. Using magnetic resonance imaging (MRI), a type of brain scan, the researchers compared blood flow in the brains of patients once after using oxytocin and again after using placebo. They were particularly interested in a brain structure called the hippocampus, because previous studies have shown that altered blood flow in this region predicts adverse clinical outcomes (such as transition to psychosis). Pharmacological treatments that can modulate hippocampal blood flow have therefore become the subject of increasing research interest.

The researchers found that a single dose of oxytocin, which is administered using a nasal spray, altered blood flow in the hippocampus and therefore merits further investigation as a potential novel treatment strategy. The study also showed, through whole-brain analysis, that oxytocin altered blood flow in the thalamus, parietal cortex and cerebellum, which are key regions involved in social and emotional processing. Additional promise is provided by the fact that oxytocin has been used in the NHS for many years and is known to be well tolerated and have few side effects.

Although the results show that oxytocin can engage brain regions strongly implicated in the onset of psychosis, the study did not look specifically at effects on clinically important outcomes such as preventing transition to psychosis, or improving symptoms, functioning, and social cognition. Nevertheless, the researchers hope that this study will provide the neurophysiological evidence to support future longer-term clinical trials of oxytocin in people at clinically high risk of psychosis.

Commenting on the research, Cathy Davies, PhD student at the Institute of Psychiatry, Psychology and Neuroscience, King’s College London, said: “Experimental medicine studies such as these, generously supported by the NIHR Maudsley Biomedical Research Centre, are invaluable for the early in vivo investigation of whether potential novel treatments engage specific mechanisms linked to disease, and can support the early decisions on whether to go ahead with later-phase clinical trials.

"In people at clinically high risk of psychosis, altered hippocampal blood flow represents an ‘intermediate’ but evidence-based pathophysiological target. The finding that an acute dose of oxytocin can engage and alter this target is certainly promising, but whether this translates into clinical efficacy and improved outcomes for these patients remains a question for future research.”