Professor Matthew Hotopf, Vice Dean of Research at the IoPPN at King's College London, and Director of the NIHR Maudsley Biomedical Research Centre has been awarded a CBE for services to Psychiatric Research. Professor Hotopf received the CBE from His Royal Highness the Prince of Wales at an investiture ceremony at Buckingham Palace yesterday.

Matthew Hotopf is Professor of General Hospital Psychiatry and his research explores the interaction between mental and physical health. He has worked extensively in areas where mental health relates to other walks of life, including military health, mental health law, and epidemiological studies on the impact of mental disorders.  He is an NIHR Senior Investigator and a Fellow of the Academy of Medical Sciences.

Of his award, Professor Hotopf says, ‘I am deeply honoured to receive this award.  It represents the contributions of a huge number of people in my research team, the NIHR Maudsley BRC and the wider academic community at King’s College London, working to improve the profile of mental health research and ultimately to benefit people with mental health problems.’ 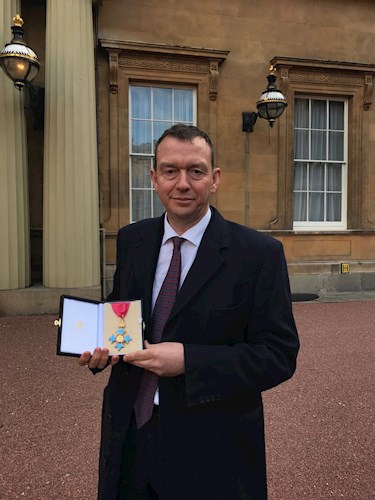 Professor Ian Everall, Executive Dean of the IoPPN said, ‘Matthew is one of the most respected medical researchers of his generation. His stewardship of the BRC has been outstanding and this honour is incredibly well deserved.’

The Queen’s Birthday Honours List recognises the achievements of a wide range of extraordinary people across the United Kingdom. CBE stands for Commander of the Order of the British Empire and is awarded for having a prominent role at national level, or a leading role at regional level. People can also be awarded one for a distinguished, innovative contribution to any area.