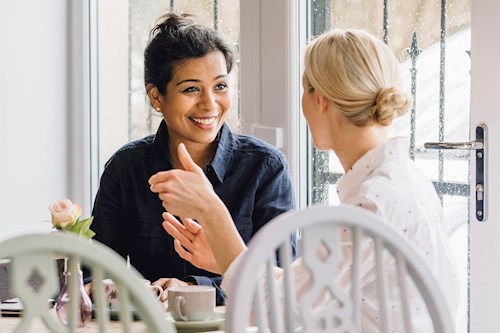 For the first time, compensatory strategies used by autistic adults have been investigated and collated in a qualitative study by BRC researcher, Professor Francesca Happé, and her MRC-funded PhD student, Lucy Livingston, published today in The Lancet Psychiatry journal.

Autism spectrum disorder is characterised by impaired social communication and by repetitive and restricted behaviours. There is limited understanding of why some autistic people appear ‘neurotypical’ in their behaviours as they grow older or in some settings, despite persisting autism-related cognitive difficulties or differences.

Compensatory strategies, which include explicitly and implicitly learnt behaviours and rules, are used by autistic people to fit in socially despite core difficulties and differences in understanding non autistic social interaction

Using an online survey of 136 adults, the study found that the use of compensatory strategies is associated with both positive and negative consequences. Compensation improves social relationships, increases independence and employment, but may also be associated with poor mental health and delayed diagnosis. The findings highlight the need for increased awareness of these strategies among clinicians and for greater support for those who need it.

The participants were asked to self-report autistic traits by completing a ten-item autism spectrum questionnaire and then a series of open questions about their social compensatory strategies. They also reported how successful and tiring their strategies were, and the likelihood of their recommending them to others with social difficulties.

The study found that participants used their intellectual and planning abilities to regulate social behaviour and follow social norms (making eye contact, preplanning social niceties, asking others questions about themselves and switching between social rules). These strategies were more difficult when distracted or stressed, but crucially, they did not reduce participants’ internal social cognitive difficulties. Shallow strategies such as laughing after joke cues were common in participants who reported more autistic traits and were linked to negative consequences of compensation.

The use of these strategies was linked with poor mental health, and autism diagnosis and support appeared to be affected too. 47 out of 58 of the diagnosed participants were diagnosed late in adulthood. Lucy Livingston, the paper’s lead author, said “Compensatory strategies make it harder for clinicians to detect autistic behaviours, but currently, diagnostic manuals contain little guidance on how to spot these strategies. We hope that increasing awareness of compensatory strategies among clinicians will help the detection and provision of support for autistic people who use them.”

External environments were found to affect compensation and it may be the case that people with autism appear ‘neurotypical’ in certain situations but not in others. Clinicians should be aware of this when measuring compensation and diagnosing autism. Recent evidence suggests that only 40% of UK GPs – the first point of contact for individuals seeking diagnosis – are confident in identifying autism spectrum disorder.

BRC researcher Professor Francesca Happé, was senior author of the study. She said: “We are increasingly realising that compensation to appear ‘neurotypical’ has negative effects on mental health for many autistic people. Not only is it exhausting, like speaking a second language learnt late in life, it also appears to erode the sense of self for some autistic people.”