Inspiring the next generation: budding young scientists go behind the scenes at the BRC 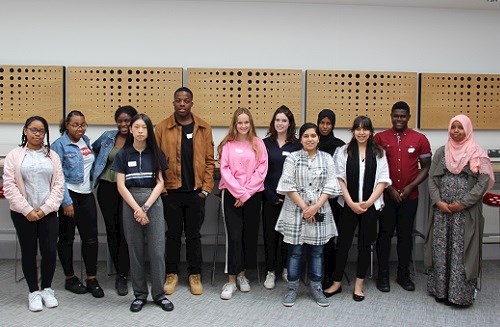 Eighteen winners of our BRC Youth Awards, part of the IoPPN Youth Awards, have completed two days of work experience with leading scientists and researchers at our Denmark Hill campus.

This year’s winners of our BRC Youth Awards, part of the IoPPN Youth Awards, have completed two days of work experience with leading clinicians, scientists and researchers at our Denmark Hill campus.

The awards are part of the IoPPN Youth Awards, which encourage young people (aged 15-18) from schools across London to stay in social science, science and maths education. The NIHR Maudsley Biomedical Research Centre (BRC) runs three Awards within the scheme, each with a different focus:

In addition to the two-day placement and involvement in the 2019 BRC Youth Takeover, winners are awarded a £50 book token.

Both days also included workshops to decide on activities for the BRC Youth Takeover, which will happen on 29 November.

The takeover is part of an annual project led by the First News, in which organisations across the country open their doors to children and young people to take over adult roles and give their perspectives to those in charge.

“The UK has a well-known shortage of science, technology, engineering and mathematics (STEM) skills, which potentially threatens future progress in health and social care. These awards aim to inspire the next generation of researchers and healthcare innovators, as well as help tackle the underrepresentation of black and minority ethnic groups in this field.

“It’s great to hear of previous winners who have gone on to study relevant subjects at university – and it was wonderful to hear from another just today who achieved outstanding GCSE results and is now starting A-Levels in biology, chemistry and psychology. We hope to see similar successes from 2019’s winners.”

The 2020 IoPPN Youth Awards will open for applications later in the year. Applicants need to be aged between 15 and 18, attend a school local to the Institute of Psychiatry, Psychology & Neuroscience (within five miles) and study a relevant subject at GCSE, A-level or equivalent.

The awards began in 2013 and the number of awards has been increasing ever since.