Problems in thinking and attention linked to COVID-19 infection

Evidence of cognitive deficits in people who have recovered from COVID-19 has been discovered in a new study of over 80,000 individuals.

The research found that those with more severe COVID-19 symptoms scored lower on an online series of tests, with performance on reasoning and problem-solving tasks being most affected. Further analysis of the data indicated that those who received mechanical ventilation to help them breathe whilst in hospital had the greatest impairment on cognitive tasks.

Published in the journal EClinicalMedicine, the research was a collaboration between King’s College London, Imperial College London and Cambridge University. It was part-funded by the UK Dementia Research Institute Care Research & Technology Centre and the National Institute of Health Research (NIHR) Maudsley Biomedical Research Centre.

A series of online tests, developed by first author on the study and Reader in Restorative Neuroscience at Imperial College London Dr Adam Hampshire had been opened up to the general public just before the pandemic for the BBC2 Horizon’s Great British Intelligence test. In early 2020 the study team extended the questionnaires to gather information on SARS-CoV-2 infection, the symptoms experienced and the need for hospitalisation.

Out of the 81,337 who provided complete data, 12,689 people suspected they had COVID-19. Participants reported a range of severity of illness, with many experiencing respiratory symptoms whilst still being able to stay at home (3,559 participants). Nearly 200 were hospitalised (192 participants) and about a quarter of these (44 participants) required mechanical ventilation.

The time since illness onset was around 1-6 months, meaning the study could not draw any definitive conclusions about whether these effects on cognition were long-lasting.

The study found a relationship between deficits in overall cognitive performance and severity of respiratory symptoms experienced. The research also found that not all areas of thinking ability correlated in the same way with COVID-19 illness and that some abilities were spared, which included emotional discrimination (recognition of faces that were expressing the same emotion) and working memory (remembering where a sequence of squares appears on the screen). In comparison ‘executive’ tasks that required skills in reasoning (such as deciding if relationships between words were similar) and problem solving (working out how many moves it would take to go from one arrangement to another) seemed to show the greatest deficit.

To understand the size of the deficits the authors compared the pattern of scores on the tests to cognitive changes that occur for other reasons. The effects in those hospitalised with mechanical ventilation were similar to the average cognitive decline seen over a period of ten years of ageing and equivalent to a seven-point difference in IQ. 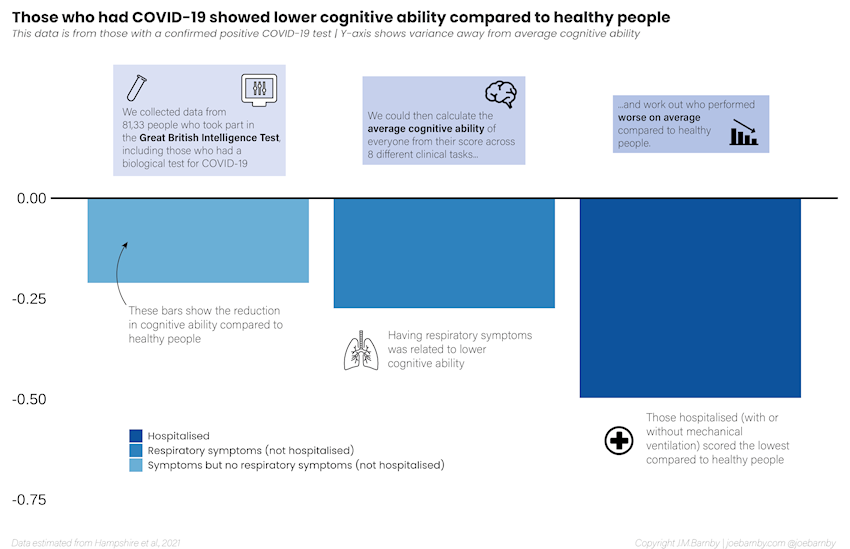 Ruling out other explanations

The researchers carried out a series of checks to ensure these cognitive deficits were associated with COVID-19 and not explicable by other variables. These included separating out those who had a confirmed positive test for SARS-CoV-2 and demonstrating that the cognitive deficits were indeed greater in those with positive tests. Further checks suggested the results were not due to a minority with pre-existing conditions or on-going symptoms of COVID-19. Analysis also indicated that it was unlikely that the results could be explained by the fact that those who contracted more severe COVID-19 disease were less cognitively able before they were ill.

Dr Adam Hampshire, first author on the study, said: “Our study adds to an increasing body of research that is looking at different aspects of how COVID-19 might be impacting the brain and brain function. This research is all converging to indicate that there are some important effects of COVID-19 on the brain that need further investigation. Going forward it would be valuable to bring together brain imaging and cognitive tests with other information on mental health and everyday function, ideally in studies that track people's trajectories for months or even years. To really know what the long-term effects are for people will require people to be followed up over time.”

New studies, such as COVID-19 Clinical Neuroscience Study (COVID-CNS), led by King’s College London and University of Liverpool and the REACT Long COVID study, led by Imperial College London, are now applying these cognitive tools to study the long-term impacts of COVID-19.

“A critical question remains as to why some cognitive functions are more affected than others,” said Mitul Mehta, Professor of Neuroimaging from King’s College London and senior author on the study. “It is already known that hypoxia and mechanical ventilation are associated with cognitive deficits similar to those observed in this study, and there is now evidence of neurological complications in some patients, as well as psychiatric consequences. As we are coming through the third wave of the pandemic, there are more available options that can reduce the severity of COVID-19 such as vaccination and effective treatments whilst in hospital. The findings from this study suggest that by reducing the severity of illness through these different approaches we may also be able to reduce the severity of cognitive difficulties people may experience.”

The research paper ‘Cognitive deficits in people who have recovered from COVID-19’ was published online first? in EClinicalMedicine on 22 July 2021.