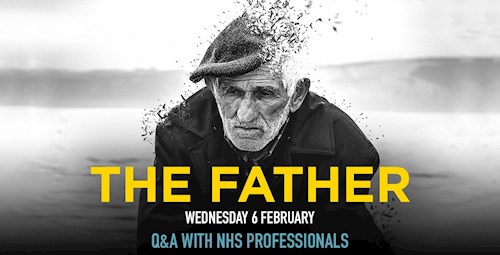 Several of our researchers led an exploration of sensitive issues raised by a production of Florian Zeller’s The Father, at South London Theatre in West Norwood on Wednesday 6 February.

The Q&A session was chaired by the BRC’s Engagement and Impact Fellow, Dr Sally Marlow, and featured Rob Stewart, Professor of Psychiatric Epidemiology and Clinical Informatics, who also leads the BRC’s Informatics cluster. Also participating were Emma Ouldred, Dementia Nurse Specialist at King’s College London, Angela Clayton-Turner, who cared for her husband with dementia and is a member of our dementia Patient and Public Involvement panel, Jessica Osorio, the play’s director, and members of the cast.

The Father depicts the relationship between a father with dementia and his daughter, who attempts to balance the demands of her own life with the need to care for him. Tackling themes that almost anyone can relate to, it challenges both the actors’ and audience’s perceptions of reality and offers insight into what it is like to experience dementia first hand. This production was informed by input and advice from Miguel Vasconcelos Da Silva, a research nurse and PhD student who also heads up the BRC’s Care Home Research Network.

The production starred Dr Kim Goldsmith, Senior Lecturer at the Institute of Psychiatry Psychology and Neuroscience at King’s College London, in the role of the daughter, Anne. Kim is part of the BRC’s Bioinformatics and Statistics Theme in the Informatics cluster, and was responsible for organising the panel together with Dr Sally Marlow.

Themes discussed by the panel included anxiety and depression experienced by carers, differences in support available now compared to the past, the difficulty of family relationships, and the role of theatre in presenting new perspectives. The cast described the challenges of taking on Zeller’s characters and how to navigate the ambiguity that is central to the play. As one cast member said: “You don’t know what you saw and what was real and what wasn’t.”

Audience members also shared their own experiences of caring for loved ones, or as health professionals and researchers in the field of dementia.