October was Rett Syndrome Awareness Month. Rett Syndrome is a rare genetic neurological disorder that affects around 1 in 10,000 females and is very rare in males. Early signs of Rett Syndrome, such as missed milestones or developmental regression, are usually seen at 6-18 months of age and these progress to severe impairments of speech, mobility, eating and breathing. There is currently no cure or specific treatment for Rett Syndrome and the King’s CRF has supported a number of clinical trials to find safe and effective treatments for the condition.

During Rett Syndrome Awareness Month (1-31 October 2021), we spoke to two parents whose children have Rett Syndrome to find out what it is like to care for someone with the condition and how clinical trials can help them and their families. 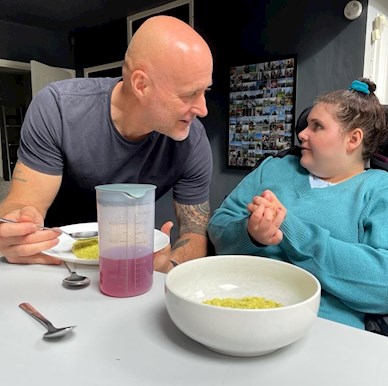 Andy Stevenson is the Co-Founder and Clinical Trials Coordinator of Reverse Rett – a patient advocacy and research organisation. His daughter Beth and step-daughter Amber both have Rett Syndrome.

Andy (right, with his step-daughter Amber) first noticed that something wasn’t quite right with his now-21 year old daughter when she was just 18 months of age, saying that:

“although she probably wasn’t reaching the developmental milestones she should have been, we didn’t think something was wrong until she started losing some of the skills she’d acquired, such as clapping, waving and maintaining eye contact.”

It took a further nine months for Beth to be diagnosed with Rett Syndrome and, at the time, very little was known about the condition. There were no treatments – let alone any research into new therapies or cures.

This motivated Andy to start fundraising to support research into the condition, which led him to join forces with the original founder of Reverse Rett and, eventually, to quit his day job to focus on being the Co-Founder and Clinical Trials Coordinator for the charity. As a research-focussed charity, the majority of the money that is raised goes towards funding clinical trials and studies into Rett Syndrome. Research currently has a focus on reversing the condition, as this has been done in mice in 2007 (the charity continues to work with the professor in Edinburgh who achieved this).

Reverse Rett were instrumental in setting up and supporting the CIPP Rett Centre – the first Centre of Excellence for Rett Syndrome - which is run by Professor Paramala Santosh of South London and Maudsley (SLaM) NHS Foundation Trust. The charity was also key to boosting recruitment to the STARS trial, which was led by Professor Santosh and supported by the King’s CRF to investigate the drug Sarizotan for its ability to reduce apnoea and other respiratory symptoms associated with Rett Syndrome. Further clinical trials supported by the charity are also planned, with studies into gene therapy scheduled for later in the year and interest from a number of pharmaceutical companies in supporting future trials.

Despite a significant increase in research into Rett Syndrome, Andy thinks it’s important that there is greater awareness of the condition, saying:

“The more people know what the signs and symptoms are, the more likely these can be spotted early. If people are diagnosed early then deaths can be prevented. There’s still a need for more funding into equipment, so that parents don’t have to find resources on their own. However, the bottom line is that the only way things will significantly improve for people with Rett Syndrome is if we discover medicines that work.”

While Andy’s step-daughter Amber took part in a clinical trial which was eventually discontinued, he said that overall it was a positive experience and that he would encourage Amber to do it again, and encouraged the families of people with Rett Syndrome to get involved in new clinical trials for the condition.

Next we spoke to mum Abigail, whose daughter Esme has Rett Syndrome. They took part in Professor Santosh’s STARS trial. Sharing her experience of caring for Esme, Abigail said:

“I am finding it physically harder to care for Esme and it feels like you are constantly juggling, never knowing what is around the corner as diagnosis is very individual and so the symptoms of Rett syndrome are different for everybody.”

Speaking about why she enrolled her daughter in the STARS clinical trial, Abigail said that:

“Research can help to find safe, effective treatment for the severe symptoms such as breathing and digestive problems, as they are such as barrier to children expressing themselves.”

Going forward, Abigail emphasised that, while looking after a child with Rett Syndrome could be lonely, the support from the Rett community is amazing and that it is important to focus on the similarities between girls with Rett Syndrome and girls without, rather than focusing on their condition.

The King’s CRF remains active in supporting clinical trials in to new treatments for Rett Syndrome, with one clinical trial currently active which is investigating the ability of blarcamesine to reduce some of the symptoms of Rett Syndrome, as well as another trial in set up. The King’s CRF also continues to hold regular Rett clinics, which are held by Professor Santosh where he provides in-depth consultations and proposes potential ways to manage the individual girls’ conditions.