Dr Daniel Martins is a Clinical Research Associate, Dr Mattia Veronese is a senior molecular imaging scientist and Dr. Ottavia Dipasquale is a Research Associate, all in the Department of Neuroimaging at King’s College London. In this blog they discuss their recent study which is funded by the NIHR Maudsley BRC and has brought together scientists from across the world to define a new approach to integrate neuroimaging and a form of genetic mapping.

The emergence of non-invasive neuroimaging techniques, such as magnetic resonance imaging (MRI), and their increasingly large role in human brain research over the last decades have revolutionised the way we understand the brain and its dysfunction in disease.

Thanks to MRI and other imaging techniques, we can now describe a range of changes in the structure, function and chemistry of the brain in a variety of disorders, simply by acquiring images of patients from a scanner. In most cases, these data have made significant contributions to improve our understanding of the role of the nervous system in the patterns of behaviour and thinking shown in different mental health conditions.

Over the years we have come to appreciate that, for most cases, changes and differences in the brains of patients with different conditions are not random but follow certain spatial patterns where some regions of the brain are more severely affected than others. We call this regional vulnerability and if we can find out more about what factors contribute to these patterns then this could provide insight into developing and evaluating new treatments.

“A dance for two”: Bringing neuroimaging and transcriptomics together

While often thought of as a single organ, the brain encompasses a vast number of different regions which vary in their composition at both a cellular and molecular level. We are interested in whether regional vulnerability to a certain brain disorder is reflected in the landscape of genes and cells that make up a certain brain region. A new technique called Imaging Transcriptomics that integrates imaging with a form of genetic analysis might hold promise in investigating this question.

Transcriptomics is the analysis of the transcriptome which is collection of all ribonucleic acid (RNA) that is present in a cell, tissue or organ at a given time. RNA performs many functions within the cell, and studying the transcriptome provides insights into how genes are working.

While neuroimaging data offer a unique opportunity to map brain changes in patients at the macroscopic level, most techniques do not allow to specifically quantify genes or cells because they lack the spatial resolution. However, there has been a huge effort from the molecular biology research community to map the processes by which genes get turned on to produce RNA and proteins across multiple regions in post-mortem brains.

A good example of this is the work of the Allen Institute to create the Allen Human Brain Atlas (AHBA). The incredible anatomical detail of this atlas alongside the effort to image all these post-mortem brains with MRI have for the first time opened the possibility to map the fundamental activity of genes in the brain to MRI scans.

This impressive resource coupled with work from research groups, including our own at the NIHR Maudsley Biomedical Research Centre (BRC), has led to Imaging Transcriptomics becoming a popular method in neuroimaging studies. In simple terms, this approach tries to predict the regional variation of certain neuroimaging markers, such as changes in brain structure or function during disease, based on data on genetic expression in the post-mortem human brain as available in the AHBA. However, despite its increasing application, there are still some open questions about whether this framework could capture something biologically meaningful or is it just an interesting new approach?

This is the question that our recent paper in Cell Reports has attempted to answer. By using data from positron emission tomography (PET) imaging – a technique that uses radioactive compounds to trace molecules in the brain - we have tested how well the gene and cellular composition of the brain might be reflected in neuroimaging measurements at the macroscopic level.

PET provides a great opportunity to understand the cellular and genetic make-up of the brain since we know which molecules the tracer binds to and what type of cell populations it might target. If we assume the imaging transcriptomics approach is valid then we can formulate more precise hypotheses on the genes that should align with the regional distribution of a neuroimaging marker and test this. 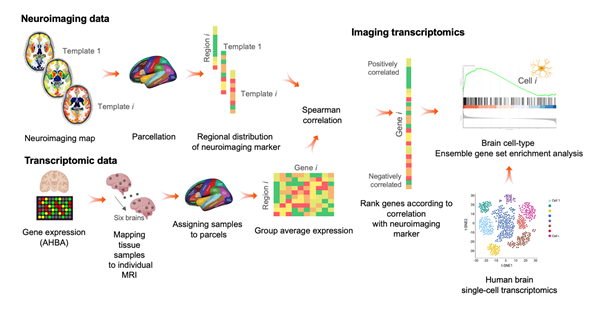 This was exactly what we did in our paper. By using several PET tracers, we could span a wide-range of different elements of the biology of the brain, from brain cells to star-shaped cells called astrocytes in the nervous system and myelin which is the layer around the nerve fibres.

With the exception of tracers that are currently used to study inflammation in the brain, we found that the expression of genes known to be present in certain types of brain cell could provide an efficient way to predict the extent to which a certain tracer binds in different regions of the healthy human brain. The reasons underlying the lack of correspondence between PET and genes that play a role in the inflammatory mechanisms in the brain is currently unknown, but we believe that the fact that we relied on PET data from healthy controls, where neuroinflammation is admittedly low, could have contributed.

The power of international collaboration and data sharing in medical research

One of the goals we had for this work was to investigate different molecular elements of the architecture of the human brain spanning different biological processes and cell types. To accomplish this mission, we needed data from a vast number of different PET tracers. This was beyond what our own library of PET templates included so to overcome this limitation, we contacted several research groups across the globe and setup a new initiative to gather PET data from healthy controls for 13 tracers through a new consortium – the PET templates Working Group.

Through this work, we created a unique resource which was only possible thanks to data sharing. We believe the resource will benefit further research in human neuroscience and has been a great example of the power and importance of collaboration in scientific research.

Now that we are more confident that what we measure with neuroimaging reflects to an extent the gene and cellular landscape of the brain, there are several opportunities ahead.

For instance, by identifying genes whose expression preferentially align with the changes we see in neuroimaging data from a certain population of patients, we can now better inform hypotheses about genes that might contribute to the risk to disease and biological pathways that might contribute to the brain pathology. Ultimately, we hope that this approach can help identify certain molecular targets that might be worth exploring in studies for new therapies.