Genetics helps estimate the risk of disease – but how much does it really tell us?

Genetics research has made momentous strides in the 21st century. At the start of the century, we had a broad understanding that most medical problems in the developed world are partly genetically determined but lacked the technology to fully explore the secrets hiding in our genome.

This century’s technological advances have allowed us to make substantial progress in identifying the genomic underpinnings of heart disease, mental health disorders, cancer, dementia, and other diverse diseases that medicine still struggles to prevent, diagnose and treat.

We can now quantify the overall genetic contribution (heritability) and identify specific genetic variants that contribute to the risk of these diseases. But, as with most things genetic, it’s complex, it’s incomplete and scientists are still working out how to make it clinically useful.

Each of these diseases and disorders has a “polygenic” underpinning. This means that instead of only one or a few genes playing a role in the risk of diseases, it is likely to be thousands of genes where inherited changes in each gene make a modest impact on our risk of each disease. This dispersed genetic component combines with other environmental risk factors – such as smoking, diet, trauma and stress - to further increase or decrease our risk of ill health.

This polygenic underpinning is good news in many ways: our risk is determined by multiple genetic variants and usually not by a single yes/no genetic risk factor. Some single genetic risk factors do exist, such as variants in the BRCA1 and BRCA2 genes that substantially increase the risk of breast and ovarian cancer. But these single-hit genetic variants are rare – meaning that, for most of us, genetic predisposition comes from the combined risk of many variants.

Genetic studies over the past 20 years have identified many such variants that contribute to the polygenic loading for disease: more than 100 for breast cancer, depression and coronary artery disease, and 38 for Alzheimer’s disease. All these variants can give us information on the underlying biology and new targets for drug development. These variants can also contribute to the calculation of risk scores, indicating those who are at genetically high risk of disease and those who are at low risk.

The term “score” is appropriate here because it can be calculated by simply adding up the number of high-risk genetic variants carried across the genome, weighted by the importance of each variant.

So are polygenic scores useful? Potentially, yes, but mostly no – not yet. Polygenic scores can give us a personal estimate of our genetic risk for a certain disease, which remains constant throughout life and can be calculated at any point. They could give an impetus to lead a healthy lifestyle, undertake appropriate screening, or be watchful for early symptoms.

23andMe shows you information on your polygenic risk of type 2 diabetes. And websites such as impute.me allow you to upload your own genetic data to calculate your polygenic scores.

Making sense of your score

The MyGeneRank app gives you your coronary artery disease score on your phone by linking to your 23andMe genetic data. This sounds wonderfully accessible, but what can your coronary artery disease polygenic score actually tell you? First, it can tell where your risk lies compared with other people of the same genetic ancestry as you. For example, if MyGeneRank tells a person that their polygenic score lies at the 55th percentile of the distribution, then their risk lies very close to average.

What about someone who is at the 95th percentile, in the top 5% of people with the highest genetic risk? That might be worrying information, but to interpret a polygenic score you need two further pieces of information. First, you need a “relative risk”: how much does your polygenic score change your risk compared with an average person? Does it double your risk or increase it tenfold? Second, you need a “lifetime risk”: what is your chance of being diagnosed with the disorder? 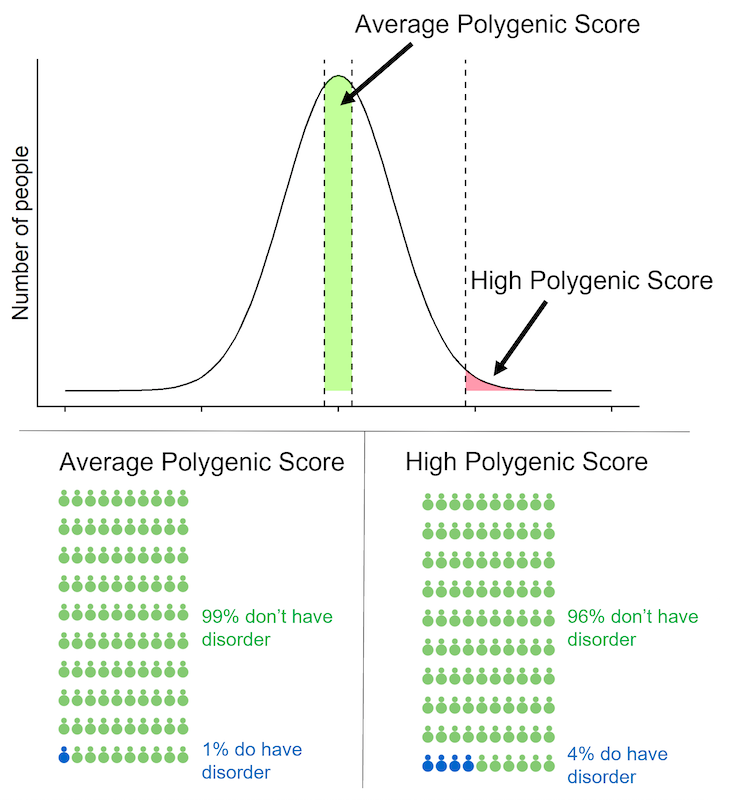 Polygenic scores give you a snapshot of your genetic risks, but for most disorders, the partial information captured is not strong enough for it to be useful. The next decade will determine whether polygenic scores remain a personal curiosity, or whether they become an important medical tool.

This article is republished from The Conversation under a Creative Commons license. Read the original article.