This story has been repurposed from the HYPE project website

It was around the time of being asked to analyse and write a paper investigating the link between financial debt and mental health, that the deeply saddening story of Jerome Rogers’ suicide was being retold by the BBC 'How debt kills - Jerome Rogers: 1995 - 2016'. Jerome Rogers was from South East London and only 20 years old when he died by suicide following a period of financial crisis coinciding with a number of related stressors. Prior to his death, Jerome had a number of interactions with bailiffs. This appeared to be as a result of employment difficulties, which contributed to on-going late debt repayments.

It would be no surprise that the stress of these experiences may have led to a worsening of his asthma and physical health.

We at The HYPE Project spoke with Niaomi Collett and Daryl Harper from Money Talks Education, “…it is challenging for young people to avoid making the same mistakes that adults make when, in many cases, there is little example of positive role modelling concerning money and sound financial management in the home. Children and young people are therefore more likely to have a negative relationship with money and get into debt, because that has been perpetuated in their environments.” Says Niaomi.

Most of us are not taught financial education in schools and as a result, we see many families caught in a viscous cycle of working just to make ends meet and the majority of families do not have an emergency fund, so borrowing is often their only option”

As children begin to form their attitudes and habits towards money from as early as 7 years old, materialism and a false sense of wealth have become commonplace among our youth.

Niaomi goes on to tell us “Our children and young people are growing up in a society where instant gratification is lauded and the concept of investing (not just financially speaking) for the long term is alien to them. Our workshops support young people and their families to address some of the inherited subconscious views we all hold about money and to understand the importance of saving, budgeting and long financial goal setting. I inherited a significant amount of money when my dad sadly passed away, but like most people who do not come from money, or have an understanding of what to do with large sums, it burnt a hole in my pocket and I did not have much to show for it,”

“Having learnt the hard way, I felt a responsibility to share the knowledge and financial education I’ve since acquired and when I met Daryl, who had been teaching financial education to families for more than 10 years, we formed Money Talks Education out of our desire to make an impact to the financial lives of as many young people and families as possible."

So, how common are mental health difficulties for those experiencing financial debt? 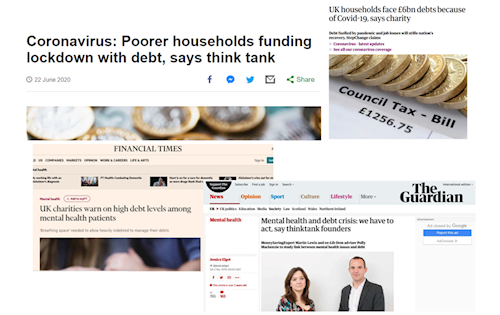 Let’s take a look at the statistics
Several studies have suggested that being in debt has negative consequences on mental health. According to the recent report from Money and Mental Health which includes nationally representative survey data, almost half of the individuals with financial debt also had a mental health difficulty.

What was even more astounding was the discovery that psychological autopsy studies have shown that being in debt placed individuals at almost eight times the risk of completed suicide (Richardson et al., 2013).

However, unlike other socioeconomic factors such as unemployment, income and financial strain, relatively few studies examined debt as a specific aspect of socioeconomic disadvantage contributing to poor mental health outcomes.

What did our research tell us?
In an attempt to address this gap in the literature, Dr Cerisse Gunasinghe and colleagues conducted a research study (Gunasinghe et al, 2018), aimed to examine the rate of debt across different groups of people living in South East London and the impact on common mental disorders (CMD), recovery and mental health service use (MHSU) using data from the South East London Community Health (SELCoH) study. This survey-based study of randomly selected

households in the boroughs of Southwark and Lambeth, assessed the demographic and socioeconomic characteristics of those who took part as well as their experience of physical and mental health symptoms; health service use; and a range of social stressors and psychosocial resources (Hatch et al., 2011).

To assess debt, participants were asked whether, in the past year, they have been behind in paying for any of the following: rent, utility bills, goods on hire, mortgage repayments, council tax, credit card payments, telephone/mobile phone and other loans.

From 2008 to 2010, at initial assessment, 17.5% of 1698 participants reported having debt and 16.1% of 1052 participants at follow-up. Participants completed the follow-up assessment from 2011 to 2013, on average two years after their first interview. Notably, young people aged 16-35 reported the highest proportions of debt in this sample. The study found that individuals who reported debt were twice as likely to meet the criteria for CMD, compared to those not in debt. In addition, participants who reported both CMD and debt in their initial interview were three times more likely to also meet the criteria for CMD at follow-up, compared to those who reported CMD but no debt. This suggests that being in debt may not only have a negative effect on mental health but also recovery from mental health problems.

When we looked at MHSU, those who reported debt at follow-up were found to be nearly five times more likely to have used talking therapy in the past year, in the absence of common mental disorder approximately two years prior. This was higher than the increase in talking therapy use associated with CMD, suggesting that debt may be a stronger predictor of MSHU than CMD.

It is in light of these findings that we recommend the provision of integrated debt and mental health care which would better serve our local communities to better manage the complexity of these issues. As mentioned in our research article, some NHS psychological services (also known as talking therapies) provided within the Increasing Access to Psychological Therapies (IAPT) services have integrated financial advice and support when appropriate. In addition, debt management charities and financial institutions are increasingly providing advice and resources to clients as they recognise the importance of supporting the mental health of their clients.

What’s next?
These findings are in amongst a number of recently published papers relating to the health of young people and are why we at the NIHR Maudsley Biomedical Research Centre developed our newest initiative, The HYPE Project. The HYPE (Improving the Health of Young PeoplE) Project is an online recruitment, risk assessment, and resource platform for young people (aged 16 and over) aimed at improving the understanding of problems affecting young people’s health, increasing young peoples’ involvement in research and improving access to online and community social and health-related resources.

The HYPE Project online platform also offers signposting to relevant charities and organisations, self-help materials and information about community activities and events. Access to all the resources is free regardless of whether the young person takes part in the research survey. “We are excited to be working with The HYPE project, delivering fun, engaging and relevant financial education sessions and we look forward to being a part of a project that proactively works to tackle some of the these issues at the root cause” say Niaomi and Daryl.

More recently we have shifted our focus to gain an understanding the impact of social distancing measures since the Coronavirus/COVID-19 pandemic, on different aspects of the lives of young adults, how they are coping during this period, and what has been particularly difficult to deal with. This information will help us to understand how we can best target support available on our website. We intend to share what we find with our HYPE community members in addition to other organisations and community groups, to help them support young adults too.

For more information about our new COVID-19 project, visit: https://hypekcl.com/hype-covid-19-project

For more information about The HYPE Project and to sign up, visit: https://hypekcl.com/

About the authors
Dr Cerisse Gunasinghe is a postdoctoral researcher and Counselling Psychologist in the department of Psychological Medicine, IoPPN at King’s College London and is currently project co-ordinator for the HYPE (improving the Health of Young PeoplE) Project, a web-based recruitment, risk assessment, and resource platform for young adults (aged 16 and over) that will facilitate young people’s involvement in research and improve access to online and community-based social and health-related resources. As a research-practitioner, one of her many interests is how research has direct implications for clinical practice.
Nicol Bergou is a Research Assistant in the department of Psychological Medicine, IoPPN at King’s College London and is currently working on The HYPE Project. She has a background in Psychology and has completed an MSc in Psychiatric Research. Nicol is a co-founder and a producer of the Beyond the HYPE podcast and runs podcast training for young people, teaching them how to start their own podcast and have their voices heard. She is interested in using electronic health records for research, and is starting a PhD in October 2020.
Daryl Harper is Senior Vice President of a Financial Education Company and has been a financial educator with 12 plus year’s experience coaching and mentoring both individual clients and large groups of people to grow in the area of financial literacy. Daryl is an infectious and dynamic speaker who provokes his audiences into taking positive action to achieve their goals and dreams.
Niaomi Collett is a multiple business owner and property investor. She is the Director of Raise House Children’s Home and Founder of Raise the Foundation, a charity supporting looked after children and young people leaving care. Niaomi is former Deputy Director of Widening Participation at King’s College London and worked for 15 years across different universities to increase the number of under-represented young people accessing Higher Education.
Tags: Patient and Carer Involvement and Engagement -