A single case study of an individual with longstanding heroin addiction has shown heroin-induced slow and ineffective breathing, as well as apnoea, in research from the NIHR Maudsley BRC.

This five-year study followed a 62-year-old man with a 45-year history of opioid use who has been injecting pharmaceutical heroin (diamorphine) daily for several decades but who has not smoked or taken illicit drugs or alcohol for more than 10 years.

The participant was seen at separate time-points (five years apart) with different doses of the diamorphine (pharmaceutical heroin), maintenance treatment and has been studied at the NIHR-Wellcome Trust King's Clinical Research Facility (CRF). Researchers measured respiratory depression, where the rate and depth of breathing are lower than normal, after each injection. The report has recently been published in Addiction. 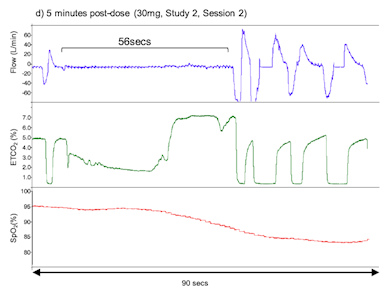 Researchers found clear variation between each session, supporting previous observations of an inconsistent relationship between opioid dose and overdose risk. They found remarkably long periods of total apnoea (complete absence of breathing): any pause in breathing of more than 10 seconds combined with reduced oxygen levels in the blood (hypoxaemia) is potentially dangerous and these were found across all study sessions.

Lead author Dr Basak Tas, a Postdoctoral Researcher at Institute of Psychiatry, Psychology & Neuroscience (IoPPN) said 'There are very few opportunities to study opioid overdose with people who are actually taking heroin in a manner that is safe and ethically sound. This study carried out at the NIHR-Wellcome Trust Clinical Research Facility is truly unique and multidisciplinary. It is critical, now more than ever, given that there is still a high prevalence of overdose deaths in the UK and globally.”

Sir John Strang, Professor of Addictions at Institute of Psychiatry, Psychology & Neuroscience (IoPPN) and Lifestyle substance use and harms theme lead at the NIHR Maudsley BRC, said “Individuals with heroin addiction problems are often marginalised and attract little public concern, but we have a responsibility to address the health needs and research challenges of the disenfranchised. The opportunity to work with respiratory medicine colleagues to conduct research in a living laboratory has been remarkable.

A particularly important aspect of this study is demonstrating the feasibility of experimental testing of heroin overdose in a safe clinical setting. Studies in our ‘overdose laboratory’ are ongoing, and it will not only improve understanding of opioid overdose but may also form the basis for new behavioural and technological interventions designed to reduce risk of overdose and, crucially, prevent overdose deaths”.

Drug use is a major cause for concern in England and Wales. There were 2,917 deaths from illicit drugs in 2018 an annual rise of 17% including with most deaths due to opiates such as heroin, according to the Office of National Statistics.

Heroin and other opioids affect the mu-opioid receptors in areas of the brain responsible for breathing to cause this respiratory depression and impair the control of breathing. This in turn can result in elevated levels of carbon dioxide in the blood (hypercapnia) as well as a reduction in oxygen partial pressure (hypoxaemia), and eventually respiratory failure and death.